Children love stories. It’s true! That’s why we thought of presenting you 4 very short stories that we loved as kids back in our days, in one single article.

And every child enjoys it for different reasons – be it traveling to magical worlds, learning new concepts, going on adventures, etc.

With stories, the possibilities are truly limitless — your child can join Tintin as he travels the world, solves mysteries and nabs crooks; your child can study at Hogwarts and learn about life through the magical world of Harry Potter; your child can go back in time and become an active participant at Akbar’s court.

Perhaps the best way to help a child explore, express, understand emotions, problems, problem-solving, habits, and much more is via stories. Be it a quick bedtime tale or a grandma fable, each story helps a child enter a completely different magical and imaginative world that has no boundaries.

Let us now have a look at 4 such popular and amazing stories for kids:

Most children end up finding one or two stories that they love and end up listening to/reading them over and over again. Short stories with very few characters, a simple setting, and themes are the easiest to remember.

In fact, it also helps children enhance their literacy skills. Simple three and four-letter words are put together to form such stories. They can be heard, comprehended and read by the child with ease.

Without further ado, let’s get into the list of 4 short stories kids would love to read and which will help them explore the free world.

A mouse and a frog were friends. Every morning the frog would hop out of his pond and go to visit his friend who lived in a hole in the side of a tree. He would return home at noon.

The mouse delighted in his friend’s company unaware that the friend was slowly turning into an enemy. The reason? The frog felt slighted because though he visited the mouse every day, the mouse on his part, had never made an attempt to visit him.

One day he felt he had been humiliated enough. When it was time for him to take leave of the mouse, he tied one end of a string around his own leg, tied the other end to the mouse’s tail, and hopped away, dragging the hapless mouse behind him.

The frog dived deep into the pond. The mouse tried to free himself but couldn’t, and soon drowned. His bloated body floated to the top.

A hawk saw the mouse floating on the pond’s surface. He swooped down, and grabbing the mouse in his talons, flew to the branch of a nearby tree. The frog, of course, was hauled out of the water too. He desperately tried to free himself, but couldn’t and the hawk soon put an end to his struggles.

In Africa, they have a saying: ‘Don’t dig too deep a pit for your enemy, you may fall into it yourself’.

The Prince and The Snake

The kingdom of Vijaygarh had a wise and kind King. People were happy. But the King himself was sad and worried. A devilish snake had entered his son’s body. Neither medicine nor magic worked to cure his son.

When the Prince grew up, he thought, “It is because of me that my father worried.” And one day, he left the palace. Wandering, he came to another kingdom. He found a desolate temple and started living there. He begged for food.

The King of that kingdom was cruel. But he had a kind and beautiful daughter. The King was unhappy with his daughter. That girl was always ridiculing her father’s hard work. The King thought, “She is always talking to my low of my hard work. I must marry her to a beggar. Then she will know what hard work is.”

So, when the beggar Prince came to beg for food in the Palace, the cruel King forced him to marry his daughter. The Prince and his new bride started for the desolate temple. On their way, they stopped to take rest. The Princess went around in search of food, while her husband went to sleep.

The Princess killed both the snakes with all her courage. When her husband woke up, she told him about the two snakes. The Prince was happy. Then he told her who he really was. They set off to the Prince’s palace. The King was delighted to see his son. When the King learned that the devilish snake was killed, his joy knew no bounds. The Prince and the Princess lived happily for a long time. After a few years, the Kingdom celebrated the day on which the Royal couple gave birth to twins of one boy and one girl.

The Hare and the Tortoise

There once was a speedy Hare who bragged about how fast he could run. Tired of hearing him boast, the Tortoise challenged him to a race. All the animals in the forest gathered to watch.

READ  5 Motivational Short Stories That Everyone Should Know

The Hare ran down the road for a while and then paused to rest. He looked back at the tortoise and cried out, “How do you expect to win this race when you are walking along at your slow, slow pace?”

The Hare stretched himself out alongside the road and fell asleep, thinking, “There is plenty of time to relax.” 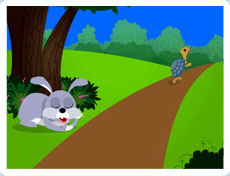 The Tortoise walked and walked, never ever stopping until he came to the finish line.

The animals who were watching cheered so loudly for Tortoise that they woke up the Hare. The Hare stretched, yawned and began to run again, but it was too late. The tortoise had already crossed the finish line.

The Lion and the Mouse 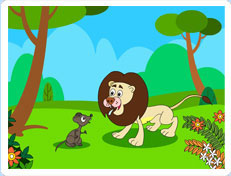 Once when a lion, the king of the jungle, was asleep, a little mouse began running up and down on him. This soon awakened the lion, who placed his huge paw on the mouse, and opened his big jaws to swallow him.

“Pardon, O King!” cried the little mouse. “Forgive me this time. I shall never repeat it and I shall never forget your kindness. And who knows, I may be able to do you a good turn one of these days!”

The lion was so tickled by the idea of the mouse being able to help him that he lifted his paw and let him go.

Sometime later, a few hunters captured the lion and tied him to a tree. After that they went in search of a wagon, to take him to the zoo. 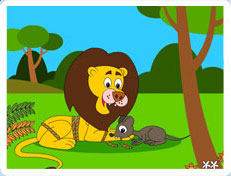 Just then the little Mouse happened to pass by. On seeing the lion’s plight, he ran up to him and gnawed away the ropes that bound him, the king of the jungle.

“Was I not right?” said the little mouse, very happy to help the lion.

MORAL: Small acts of kindness will be rewarded greatly.

Storytelling plays a crucial role in the overall development and growth of a child. Narrating a tale or helping a child read a story has been a parent-child fun activity since time immemorial.

A story not only instills virtues in your child, but it also helps them confidently enter a world of dreams and endless possibilities. Help your child enhance his/her listening, memory and communication skills through such wonderful stories.

Every one of us grew up with stories, Let’s hope our kids too.